Milt Stegall was born January 25, 1970 in Cincinnati, Ohio and played collegiate football at the University of Miami at Ohio. He finished his college career with 106 receptions for 1,581 yards and was a three-time Mid-American All-Conference selections.

Stegall joined the Winnipeg Blue Bombers for the last six games of the 1995 season. By his third season with the Blue Bombers in 1997 Stegall was an offensive force to be reckoned with – he caught 61 passes for a total of 1,616 yards and 14 touchdowns and set a CFL record with an average 26.5 yards per catch. He set the Winnipeg Blue Bomber’s franchise record for most consecutive games with a receiving touchdown with 8. He was named to a division All-Star, as well as a CFL All- Star for the first time in his career and was Winnipeg’s nominee for Most Outstanding Player.

In 2000, Stegall continued his exceptional career by leading the league with 15 receiving touchdowns and had seven 100-yard receiving games, five of which were for 145 yards or better. He was again Winnipeg’s nominee for Most Outstanding Player. In 2002, Stegall had one of the greatest individual seasons in CFL history. He led the league in receptions (106), receiving yards (1,896), yards from scrimmage (1,896), touchdowns (23), receiving touchdowns (23), 100-yard games (10), average yards per catch on a min. of 50 (17.9), and non-kicker scoring (140). He set a new league record for Touchdowns, Single Season and Receiving Touchdowns, Single Season both with 23. He set or tied 12 Winnipeg Football Club records during the 2002 season. He was voted the CFL’s Most Outstanding Player, as well as a Western All-Star and CFL All-Star.

At the time of his retirement in 2009, Milt Stegall was the CFL’s all-time leading receiver with a career total: 845 receptions, 15,153 receiving yards, 17.7 yards average, 144 receiving touchdowns, and a longest gain of 105 yards. He held the following CFL records: Most Touchdowns, Career (147), Most Touchdowns Single Season (23), Most Receiving Touchdowns, Career (144), Most Receiving Yards (15, 153). He is also a member of the Winnipeg Football Club Hall of Fame. 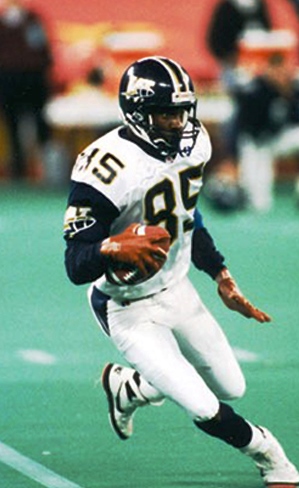