Éric Lapointe was born September 13, 1974 in Brossard, Quebec. He dominated the record books during his four year career as running back with the Mount Allison Mounties. In just 28 games, Lapointe racked up a total of 4,666 career yards, only 29 yards short of the CIAU record at the time. He also set an Atlantic University Sports single season record with 1,619 rushing yards. He had a career total of 31 touchdowns.

He won numerous awards for his outstanding performance on the football field including: CIAU Rookie of the Year – 1995, Hec Crighton Trophy for Most Outstanding Player in CIAU – 1996 and 1998, Most Outstanding Player in the Atlantic Conference – 1996 and 1998, as well as being a three time All-Canadian and helping his team win the AUAA Championship in 1997. In 2005, a Canadian University fan poll selected Lapointe as the best university football player of all time.

Following his four years at Mount Allison, Éric Lapointe, would go on to have a successful professional career with the Montreal Alouettes. He is also a member of the Mount Allison Sports Hall of Fame. 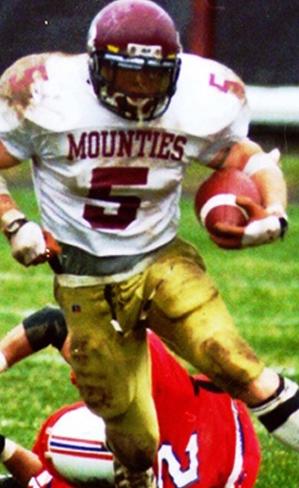