Tyrone Jones was born August 9th, 1961 in St. Marys, Georgia. Prior to joining the CFL he played college football at Southern University where he was the leading tackler with 136 tackles, 90 solo and 46 assisted. He was the team’s defensive captain and chosen as the Defensive Most Valuable Player in 1982.

Jones singed as a free agent with the Winnipeg Blue Bombers in 1983. He had an outstanding rookie season leading the club in quarterback sacks with 18, and registering 66 tackles and 16 assists. In 1984, he helped the Winnipeg Blue Bombers to a Grey Cup Championship over the Hamilton Tiger-Cats. He was chosen as the Most Valuable Defensive Player in the Grey Cup Game, as well as being named a Western All-Star and CFL All-Star for the first time in his career.

By the 1985 season, Tyrone Jones had established himself as one of the premier linebackers in the CFL being voted Most Outstanding Defensive Player that season as well as being Western All-Star and CFL All-Star for the third year in a row. The 1987 season would be Jones last the Winnipeg Blue Bombers before taking a year and a half hiatus from Canadian football. That year he was winner of the Winnipeg Blue Bombers’ Bert Oja Award for Most Valuable Lineman, as well as being voted the Most Popular Defensive Player by fans for a second straight season.

Jones would return to the Blue Bombers half away through the 1989 season. In just nine regular season games he accumulated 35 defensive tackles, 11 assists, 1 fumble recovery, and interception for 21 yards and a touchdown. Jones led the Blue Bombers defensive unit in 1990 with a total of 11 sacks, 66 defensive tackles, 21 assists, 4 interceptions for 14 yards and 2 fumble recoveries. On special teams, he managed 10 tackles and 9 assists. He was selected as a divisional All-Star for the fifth time of his career and won his second Grey Cup Championship.

Jones would spend one season with the Saskatchewan Roughriders and one season with the BC Lions at the end of his career. At the time of his retirement, he was second for Most Sacks in a Grey Cup Game with 4. He held the Blue Bomber record for Most Sacks, career with 98 and Most Sacks, Single Game with 4.5. Tyrone Jones passed away June 10, 2008 at the age of 46 after a three year battle with brain cancer. 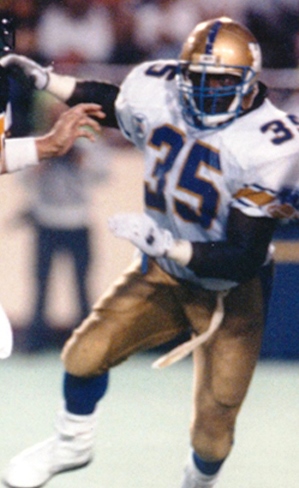