The Canadian Football Hall of Fame was awarded to Hamilton in February 1963 after a successful presentation by Mayor Lloyd D. Jackson. The Parks Board made available a large, old residence near the stadium where the soon to be gathered football treasures could be temporarily housed. Ivan Miller, retired sports editor of The Spectator, was named the first curator. 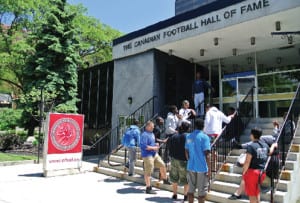 After being open only a few months, during which time football memorabilia was being received from all over the country, the land and building were sold to the Board of Education. The collection of artifacts were stored away in a safe location as the building was torn down, and a new secondary school built. Over the next seven years many new locations for the Canadian Football Hall of Fame and Museum were considered.

With both the City of Hamilton and the Canadian Football League involved in Choosing the new site, reaching an agreement was a formidable task. While discussions continued, and the cost of the project escalated, other cities placed bids to become home to the national shrine. 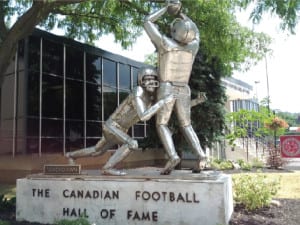 Even though the Hamilton Board of Control had voted for making a monetary contribution it was a period when the City was committed to fiscal restraint. Over the years tremendous dedication was shown by the City of Hamilton and the CFL, and the citizens continued to rally to the cause. In 1968 a prime location next to City Hall became available and the final round of negotiations began. Hamilton was hosting the Grey Cup game in 1972 and the new glass and marble Hall of Fame building opened during the Grey Cup week festivities.

Each year a Selection Committee of learned football individuals from across the country, elect up to seven individuals for induction into the Canadian Football Hall of Fame. Consideration is given in two categories:

BUILDERS: Any person who had made an outstanding contribution to football in Canada other than as a player. A Builder nominee may either be active or inactive at the time of consideration.

PLAYERS: Any person who has played a minimum of five years of amateur or professional football in Canada, and who has achieved outstanding and extraordinary success as a player.

Each year, during the football season, an “Induction Weekend” is held in one of the eight CFL cities. Ceremonies include a Celebrity Golf Tournament, unveiling of the busts, special presentations to the inductees of Hall of Fame jackets, rings and plaques. The inductees are formally accepted into the Canadian Football Hall of Fame at a Gala dinner and are recognized during the “Hall of Fame Game”.

Promoting all levels of Canadian football, the other exhibits at the Hall of Fame and Museum illustrate the rich history of the game at all levels. The Heritage Zone takes you on a tour through four historical sections which profile the history of Canadian Football. Some exhibit sections include: 1909 Grey Cup footage & artifacts and 1944 Tea Bowl footage. An increasing number of off-site exhibits are coordinated annually to promote the Hall of Fame cross Canada.

For more information about our traveling exhibits, please contact Mark DeNobile at Mark@cfhof.ca

Two exciting education programs provide students grades K-8 with the opportunity to discover the wonderful and unique history of Canadian football. The themed programs include: History of the Grey Cup and Suit Him Up: The Evolution of Football Equipment. Outreach Education program are available to schools in the Greater Toronto Area, the Hamilton Area, and the Golden Horseshoe. Some exhibits include the History of the Grey Cup, Evolution of Football Equipment, and the History of Football in Hamilton.

The artifact collections were started in the early 1960s and have increased to over 30,000 items consisting of trophies, helmets, playing equipment, game and record balls, jerseys, sweaters, jackets, flags, banners, photographs, films and videos. The collections from a major part of the on-site and off-site exhibitions, and are used extensively as part of the education programs to teach visitors about the history of Canadian Football.

The Canadian Football Hall of Fame and Museum operates as a non-profit registered charity and has a full-time staff compliment of two with over 70 volunteers.