Ray Elgaard played university football with the University of Utah and was the leading receiver in his senior year. He was selected in the second round (12th overall) by the Saskatchewan Roughriders in the 1983 college draft. He played his entire 14-year career with Saskatchewan at the slotback position.

He won many awards and honours throughout his career including being named All-Canadian four times, All-Western six times, selected the Most Outstanding Canadian three times, and was the Dr. Beattie Martin trophy winner three times.

At the time of his retirement in 1996, Elgaard was second in league history to obtain the most pass receiving yards in his career with 830 receptions for 13,198 yards, and 78 touchdowns, Also he was only the second player in CFL history to surpass the 1,000-yard mark in eight individual seasons.

Ray Elgaard was named to the Saskatchewan Roughriders’ Plaza of Honour in 1999. 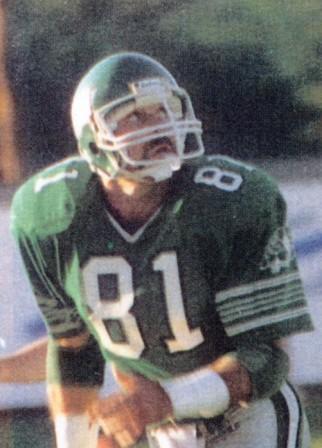