Neil Lumsden had a successful collegiate and professional career. During his time with the Ottawa Gee Gee’s, Lumsden amassed numerous records. On November 1, 1975, Lumsden scored 37 points (five touchdowns) which made him fourth all-time on the points scored in a single game list. On completion of the 1975 season, Lumsden helped the Gee Gee’s win the Yates Cup, the Vanier Cup and an undefeated season at 11-0.

Once his collegiate career was completed Lumsden was second on the all-time single season points list with 148 points (this happened in 1975). He was first on the all-time career scoring list with a total of 410 points; he was fifth on the OUA career converts list with 103. Lumsden has a 31 career touchdowns, which 27 of those were rushing.

Neil Lumsden played in the CFL for Toronto, Hamilton and the Edmonton Eskimos, where he was rookie of the year in 1976 and in 1981 he was voted top Canadian in a Grey Cup game, a four time Grey Cup champion, winning three with Edmonton and as General Manager with the Tiger-Cats in 1999.

In 2000 Lumsden was awarded by the University of Ottawa, the Meritas Tabaret Award for Alumni Achievement for Student Excellence/Contribution- Athlete of the Half Century. 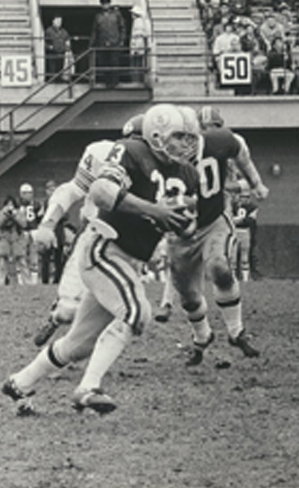