Matt Dunigan is a graduate of Louisiana Tech and joined the Edmonton Eskimos as quarterback in 1983. After a year on the sidelines, Dunigan guided the team for the next four seasons, leading them to two Grey Cup games.

Dunigan became a free agent in 1992 and joined the Winnipeg Blue Bombers, guiding them to two Grey Cup appearances. In 1995, the expansion Birmingham Barracudas signed Dunigan as a free agent. There he set career bests with 362 completions on 643 attempts for 4,911 yards and 34 touchdown passes. In 1996, he signed with the Hamilton Tiger-Cats, the final stop in his 14-year career. 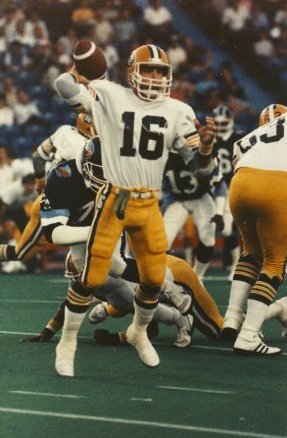