As far as he has been able to ascertain, Mark Stephen and his radio partner for Calgary Stampeders games, Greg Peterson, are the longest-serving team in CFL broadcasting history. Some might say good-heartedly that Peterson deserves Hall of Fame consideration for that, but it’s Stephen who earned enshrinement for long-term devotion to his craft.

Stephen joined CTV Calgary in 1978, working part-time in radio and television before realizing the opportunities were greater in radio. After 5 1/2 years at CFRN he left his home town of Calgary for a one-year stint at CKCK in Regina. He returned home to handle play-by-play and public relations for the Calgary Cannons AAA baseball team. When CHQR acquired the Stampeders radio rights, Stephen joined QR’s expanded sports department and, after a string of short-lived announcers, became the Stampeders full-time voice in 1996.

Stephen has called games featuring great quarterbacks who followed Doug Flutie — Dave Dickenson, Jeff Garcia and Henry Burris — along with two of the league’s top coaches, Wally Buono and John Hufnagel. Stephen has called hundreds of games, including playoffs and Grey Cups, while making his voice synonymous with the Stampeders.

Mark Stephen was inducted into the Canadian Football Hall of Fame, Football Reporters of Canada wing on November 24, 2013. 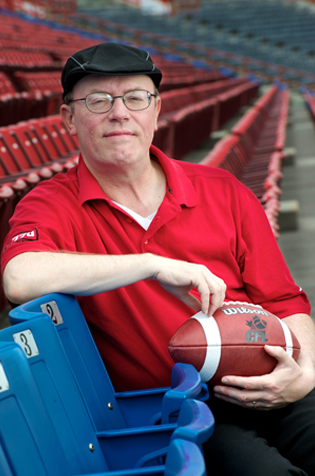