Earl Winfield spent his entire 11-year career with the Hamilton Tiger-Cats, where his only appearance in the Grey Cup was during the 1989 season. During his time with Hamilton, Winfield was in the top five of many Tiger-Cat records.

During the 1990 season, Winfield finished the season with 13 receiving touchdowns, which ranks him fourth on the all-time Tiger-Cats list. In a 1993 game versus the Edmonton Eskimos, Winfield set the Tiger-Cats record with two punt returns for touchdowns. During the 1995 season, Winfield finished with 1,496 receiving yards and 92 receptions. Both of these accomplishments place him third on the all-time Tiger-Cats list. In Winfield’s final season, he led the league with 1,320 receiving yards.

In 2005, Earl Winfield became a member of the Hamilton Tiger-Cats Wall of Honour. 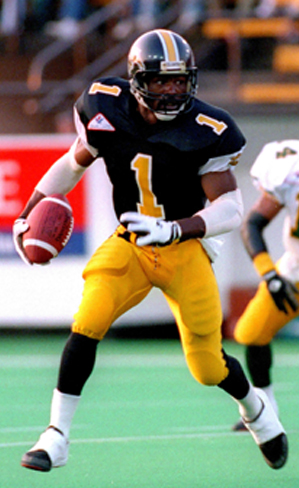