Jim Young was an all-star at Queen’s University, selected to both the Offensive and Defensive Teams in 1963, then played two years in the National Football League before beginning his Canadian professional career.

Young was B.C.’s nominee for the Schenley Most Outstanding Player Award in 1967, 1969 and 1972. He was also the club’s nominee for the Most Outstanding Canadian Award in 1967, 1969, 1970, 1971 and 1972, winning this award on two occasions. At the end of 1971 young moved to the wide receiver position and his aggressive play earned him the nickname “Dirty Thirty”. By the end of the 1975 season Jim Young held every B.C. Club record for pass receptions, yardage, and touchdowns on pass receptions. 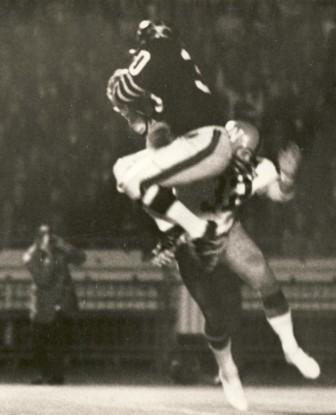