Narcisse signed as free agent with the Saskatchewan Roughriders in 1987. His rookie season he played in 8 games, making 25 catches for 318 yards and one touchdown. Due to a stress fracture Narcisse played only 10 games during the 1988 season. He had a breakout season in 1989 leading the Roughriders in all receiving categories. He had 81 receptions for 1, 419 yards and 11 touchdowns, including one touchdown during the 1989 Grey Cup game. This would be the first year in his career that he was named a Western All-Star, as well as a CFL All-Star.

In 1990, Narcisse had his second consecutive season with over 1,000 receiving yards. He made 86 receptions and gained 1,129 yards. He was the only Roughrider that year to make a reception in every regular season game. He was named a Western All-Star and CFL All-Star for the second time. During a 1993 game in Toronto, Narcisse set a team record for most receptions during a game with 15 catches.

Narcisse continued to surpass receiving records. During the 1994 season, he led the Roughriders with 72 pass receptions, 1,004 yards and scored 6 touchdowns. This was his fifth consecutive season with over 1,000 receiving yards, a record at that time. In 1995, Narcisse led the league in receptions, as well as setting the record for most consecutive games with at least one reception with 144 games. During a game against Winnipeg, Narcisse had his first CFL pass, when he threw a TD pass to Dan Farthing.

Donald Narcisse, nicknamed “Narco”, was a consistent fan favourite being voted the Most Popular Roughrider three times during his 13 season career. At the time of his retirement, Narcisse held the record for most consecutive seasons with a pass reception in every game with 11 seasons, as well as most consecutive games with at least one reception with 216 games. He had a total of eight seasons with over 1,000 pass receiving yards, seven of them consecutive. He was inducted to the Saskatchewan Roughriders’ Plaza of Honour in 2003. 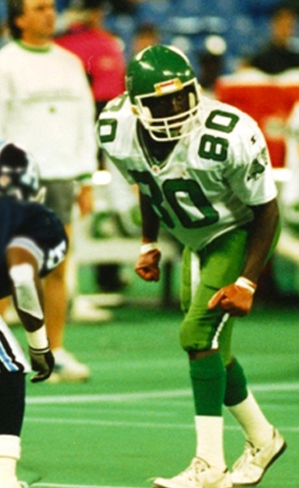