Ham began his CFL career in 1987 as a member of the Edmonton Eskimos. He was back up quarterback to Matt Dunigan and Damon Allen. In1988, he had 11 starts with the Eskimos. That season he threw 2,840 yards with 14 touchdowns and rushed for over 600 yards. Ham had a breakout season in 1989. He became the first quarterback to rush for over 1,000 yards. He threw 30 touchdowns and led the league in passing efficiency and yards per rush. That same year he was named the league’s Most Outstanding Player and was a unanimous selection as a Western All-Star and a CFL All-Star. He continued to excel into the 1990’s. Leading the league in touchdown passes with 36 and leading the Eskimos to a Grey Cup appearance during the 1990 season. In 1992, he was the league’s leading passer with an efficiency rating of 91.5.

In 1993, Ham was traded to the Toronto Argonauts in an eight-for-eight trade, one of the largest player for player transactions ever to take place at that time. After spending one season with the Toronto Argonauts, Ham signed with the Baltimore Stallions in 1994. That season he had an efficiency rating of 107.2 and held a league low of 13 interceptions. In 1995, Ham led the Stallions to Grey Cup victory against the Calgary Stampeders. He was named Most Outstanding Player in the Grey Cup game.

In 1996, Ham became the Quarterback for the Montreal Alouettes. By the end of that season he had become the all-time leading Quarterback rusher with 6,870 career yards. He yet again led the league in passing efficiency with a rating of 98.2. He played a total of four seasons with Alouettes leading them to the Eastern Division final in 1997. 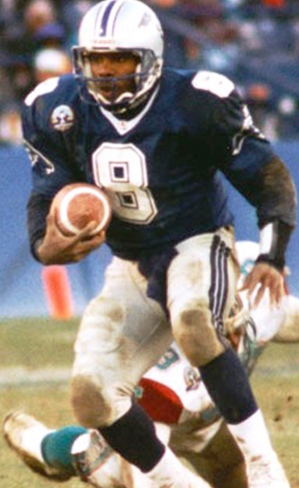