Mike Pringle was born on October 1 in Los Angeles, California and played college football at California State University, Fullerton. He was selected by the Atlanta Falcons in the 1990 NFL draft.

After spending most of that season on the practice roster, Pringle signed with the Edmonton Eskimos for the 1992 season. He was released by Edmonton and spent the remainder of the season with the Sacramento Surge of the World League of American Football. In 1993, Pringle returned to the CFL and played with the Sacramento Gold Miners for one season before being traded to the Baltimore Stallions.

Pringle and the Baltimore Stallions made two straight Grey Cup appearances, winning over the Calgary Stampeders in 1995. He joined the relocated Baltimore franchise in Montreal late in the 1996 season after being cut by the Denver Broncos.

At the time of his retirement in 2004, Pringle established new CFL records for career rushing yardage (16,425) and tied the all-time touchdown mark with 137. 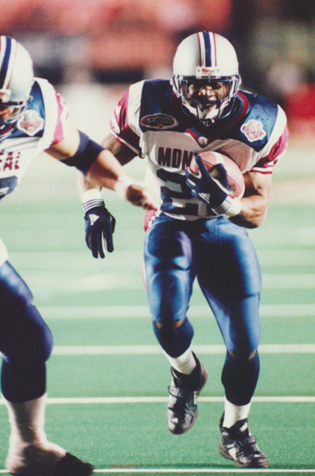