Michael Clemons signed as a free agent with the Toronto Argonauts in June 1989. In his first game as an Argonaut, Clemons was named player-of-the-game with two kickoff returns for 62 yards and five punt returns for 46 yards.

His coach, Bob O’Billovich, started calling his dynamic running back and returner “Pinball” because of his knack for bouncing off would-be tacklers. In 1997 he amassed 3,840 combined yards.

After a phenomenal career, Pinball retired in 2000 and immediately stepped into the head coaching position which he held until November, 2001. After a brief period as the club’s president, clemons again took over the head coaching job from 2002 – 2007. He has also served as the chief executive officer of the Toronto Argonauts. 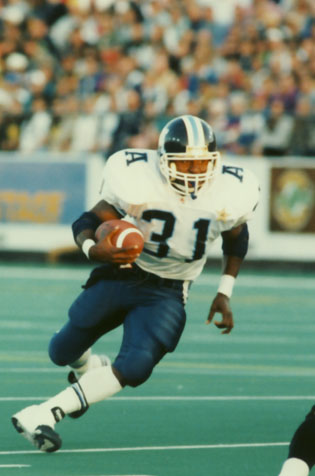