Jeffrey Cameron Russel was a young sportsman who was greatly respected by all who knew him. He participated in athletics at Lucas School and Lower Canada College in Montreal, before becoming a star halfback at RMC and McGill University.

Following university, he played for the Montreal Amateur Athletic Association’s Winged Wheelers in addition to working for the Montreal Light, Heat, and Power Company. He was soon ranked as one of the best backfielders in the Interprovincial Union and had an unparalleled reputation as an all-around sportsman and gentleman.

On May 3, 1926 Jeff Russel was killed while repairing power lines in a storm. To honour his memory the “Jeff Russel Memorial Trophy” is annually presented to the Eastern player possessing the highest qualities of courage fair play and sportsmanship. Since 1973 this trophy has been awarded to the Most Outstanding Player in the Eastern Division. The Jeff Russel Memorial Trophy was retired in 1994 at the request of the Russel Family. 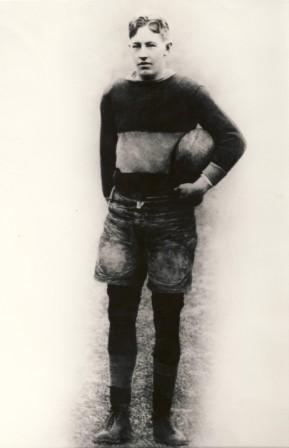