After a stellar career at UCLA, Gene Gaines was drafted by both the Pittsburgh Steelers and the San Diego Chargers, but decided to play pro football in Canada.

Gaines was an outstanding offensive and defensive halfback, and in Ottawa was considered the “quarterback” on the defensive squad.

Gaines returned to the Montreal Alouettes in the dual role of player and defensive backfield coach. Many credit Gaines’ hard work on and off the field for Montreal’s 1970 Grey Cup victory.

During his 16-year career Gaines played 217 games, 161 of them consecutive. Gaines intercepted 42 passes for 679 yards and returned 60 punts for 306 yards and had 56 kickoff returns for 1,112 yards, one a 128-yard return for a touchdown in the 1964 Eastern final against the Hamilton Tiger-Cats. 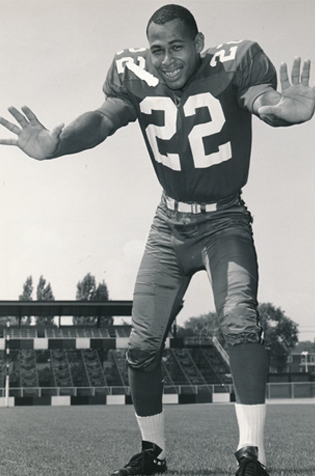