Greg Vavra played five seasons at quarterback with the University of Calgary Dinos, from 1979 to 1983, winning the Vanier Cup in his final season. Vavra became the first Univ. of Calgary player to win the Hec Crighton Trophy in 1983, awarded to the top player in Canadian University football. He was a unanimous selection as the Canadian Inter-university Athletic Union (CIAU) All-Canadian quarterback that same year.

He set the Canadian university single game passing yards record with 627 yards on October 7, 1983 vs the University of Saskatchewan Huskies, a mark which still stands (as of the end of 2019). Vavra set a single season record for passing yards in 1983 with 2,823 which has since been surpasssed. He was selected as the Canada West Player of the Year in both 1982 and 1983.

In his university career Vavra completed 611 of 1,200 passes, a completion percentage of 50.9 per cent, for 8,401 yards with 63 touchdown passes. When he left Calgary after 1983, his 8,401 career passing yards and 63 touchdown passes were both CIAU football records.

Vavra’s 55 passing attempts in a single game on October 22, 1982 vs the University of Manitoba tied the CIAU single game record. He threw for a career high 21 touchdown passes in 1983 and was named as University of Calgary Male Athlete that year.

Vavra also handled the kicking duties for the Dinos. He set a school record with a 52 yard field goal on September 22, 1982 vs Saskatchewan. His 93 yard punt on September 18, 1982 vs. Manitoba is still the seventh longest in Canadian university football (as of the end of 2019). He was Calgary’s sixth all-time leading scorer when he graduated.

Calgary defeated the Queen’s University Golden Gaels 31-21 to win the 1983 Vanier Cup, with Vavra throwing two touchdown passes and kicking five field goals plus an extra point. The five field goals are still tied for most in a Vanier Cup (as of the end of 2019).

Vavra went on to play five seasons in the Canadian Football League with the Calgary Stampeders, Edmonton Eskimos and BC Lions. He was inducted into the University of Calgary Athletic Hall of Fame on October 12, 1995. His number 17 was retired by the University, the first student-athlete to receive this honour. 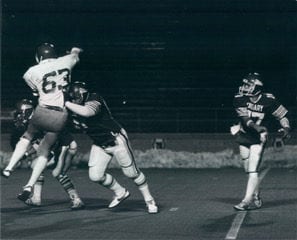