Born on April 28, 1930, Gino Fracas was an all-city halfback at Assumption High School in Windsor and helped lead them to championships in 1948 and 1949. Fracas had a successful playing career at the University of Western Ontario winning two Yates Cups Championships and in the CFL winning two Grey Cups with the Edmonton Eskimos in 1954 and 1955. After his playing career, He became head coach for the University of Alberta Golden Bears leading them to a National Championship in 1963.

Fracas returned to Windsor in 1968 where he became the first ever Head Coach of the University of Windsor Lancer Football program. He led the Lancers to the CCIFC championship in 1969, an OUAA Championship in 1975 and he was the OUAA coach of the year in both 1976 and 1977.

For his all-around excellence on the football field, Coach Fracas became an inaugural member of the Ontario University Athletics Football Legends Wall of Fame as a player, coach and administrator. In addition, the Canadian University (CIS) Football Volunteer Coach of the Year award is named in his honour.

In 1987, Fracas received the prestigious Football Canada/CFL Award of Merit for outstanding lifetime contribution to football in Canada. In all, he was inducted into six different halls of fame, including the University of Windsor Alumni Sports Hall of Fame.

The Windsor Lancers have recognized his tremendous contributions to the university by naming the University of Windsor Coach of the Year Award in his honour.

Also a professor at the university, Fracas was one of the most well known figures both on campus and in the community. In 1995, he retired after 28 successful years from the Faculty of Human Kinetics. Gino Fracas passed away in October of 2009 at the age of 79. 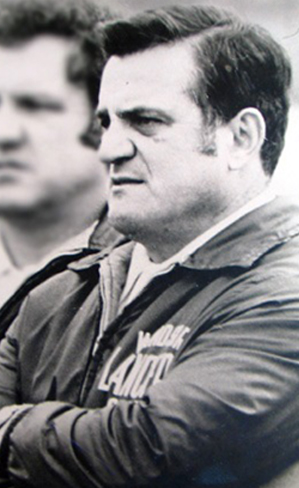