Robert “Bud” Tinsley Jr. played football at Baylor University and spent the 1949 season with the Los Angeles Dons of the American Football League. In 1950 he was drafted by Pittsburgh, but decided to continue his career in Canada.

Tinsley was a great competitor and team man he was selected team captain for 10 of his 11 years with the Blue Bombers. He played offensive and defensive tackle, but occasionally used as a ball carrier in short yardage situations. Tinsley’s weight and surprising agility made him a formidable threat.

Bud Tinsley was a Perennial All-Star and participated in all of the Shrine All-Star games held from 1955 to 1958. On october 13, 1960 he was honoured by Winnipeg Football fans at “Buddy Tinsley night”. 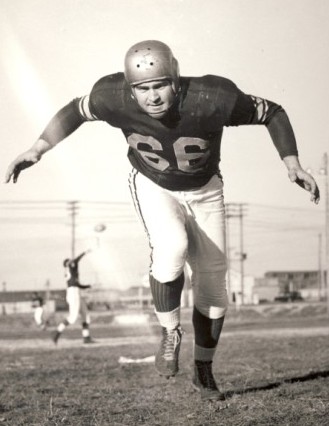