Pierre Dufault was born, educated, married, and turned to the Canadian Football League (CFL) in Ottawa. Dufault became interested in the game beginning with the 1948 Grey Cup. He started covering the league in the 1950s, moved to Radio Canada in 1964, and became the network’s play-by-play announcer in 1973, continuing in that role until 1988.

Dufault also became well known all across the country hosting the Schenley Awards presentations in the 1980s and was president of the Football Reporters of Canada in 1984. Between CFL games, he managed to cover 11 Olympics and did more than 9,000 television sportscasts, and that many, and more on radio, before retiring in 1996, after 42 years in the business, as one of the most respected sportscasters in either of our official languages.

Pierre Dufault was inducted into the Football Reporters of Canada section of the Canadian Football Hall of Fame and Museum in 2001. 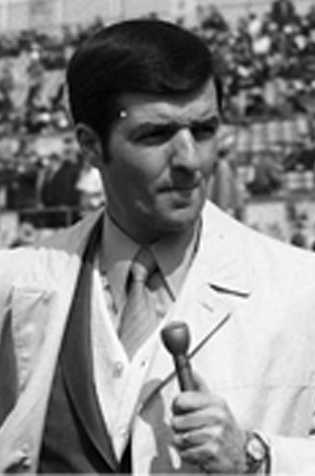