Dave (Tuffy) Knight’s canadian university football career began in 1966, when he was named head coach at Wilfrid Laurier (formerly Waterloo Lutheran) university after serving as an assistant for the 1965 season.

In 1989, Knight returned to coaching as head coach at the University of Waterloo. In his first season he turned a struggling program into a contender that posted a winning record for the first time in many seasons. For his efforts he was named CIAU coach of the year. In 1997, he led Waterloo to their first Yates Cup championship. Knight retired from the CIAU coaching ranks following the 1997 season as the most winning coach in CIAU history with 163 victories.

At the time of his retirement, Knight amassed an all-time coaching record of 163 wins, 79 losses, and 4 ties. He developed dozens of players and coaches who progressed to the CFL, among them fellow Hall of Fame member Paul Bennett.

He was inducted into Laurier’s Hall of Fame in 1986. 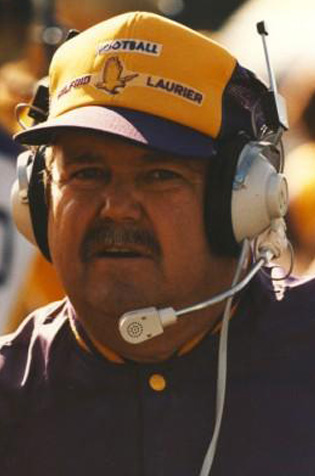