Dan Yochum began his outstanding career as an amateur football player at the University of Syracuse, where he recieved a honourable mention on the UPI (United Press International) and AP (Associated Press) All-American teams in 1972.

Yochum was a second round draft pick of the Philadelphia Eagles in 1971, but opted to play with the Montreal Alouettes instead. Yochum joined Montreal in 1972 as an Offensive Tackle and played nine season with the Alouettes.

He was All-Eastern seven times and a four time All-Canadian. In 1976, Yochum was the winner of the Schenley Award for Most Outstanding Offensive Lineman. He finished his CFL career with the Edmonton Eskimos but unfortunately an injury kept him from participating in the 1980 Grey Cup. In 2000, Yochum was named to the PA New Jersey All Millennium Top 100, as well as being named a Pennsylvania sports legend. 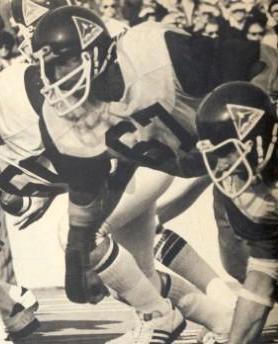