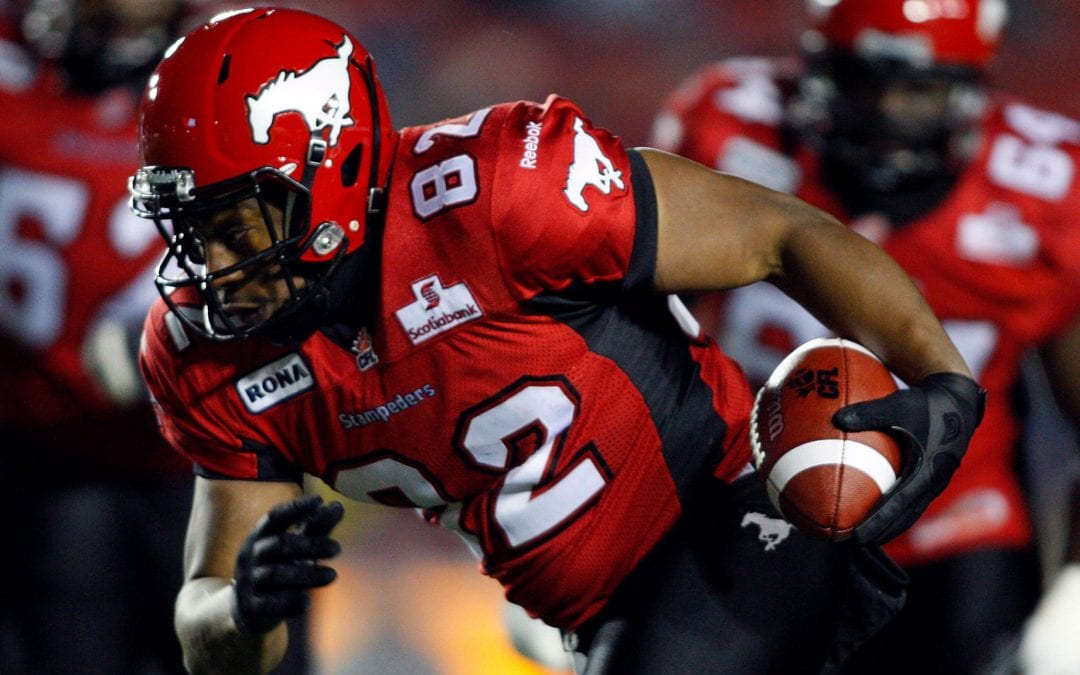 Nik Lewis was fresh out of Southern Arkansas University and found himself at an unexpected fork in the road.

He’d expected to be a fifth-round pick of the Green Bay Packers in the 2003 NFL Draft and when that fell through, his next option was an invite to join the Arkansas Twisters of the Arena Football 2 League. Lewis wanted more for himself and his initial reaction was to refuse the invite. His mom had other plans.

“You’re going from a fifth-round pick to making $200 a week for an Arena football team. I was like, ‘Not doing it,’” Lewis recalled.

That workout led to an offer to start for the team that weekend, but Lewis told them he had a workout with the Calgary Stampeders. Then-Stamps offensive coordinator John Jenkins had coached the Twisters and Lewis believes that played a part in getting his foot in the door with the CFL team that would house him for 11 seasons (2004 to 2014). He played three more seasons with the Montreal Alouettes before retiring as the league’s all-time leader in receptions (1,051). 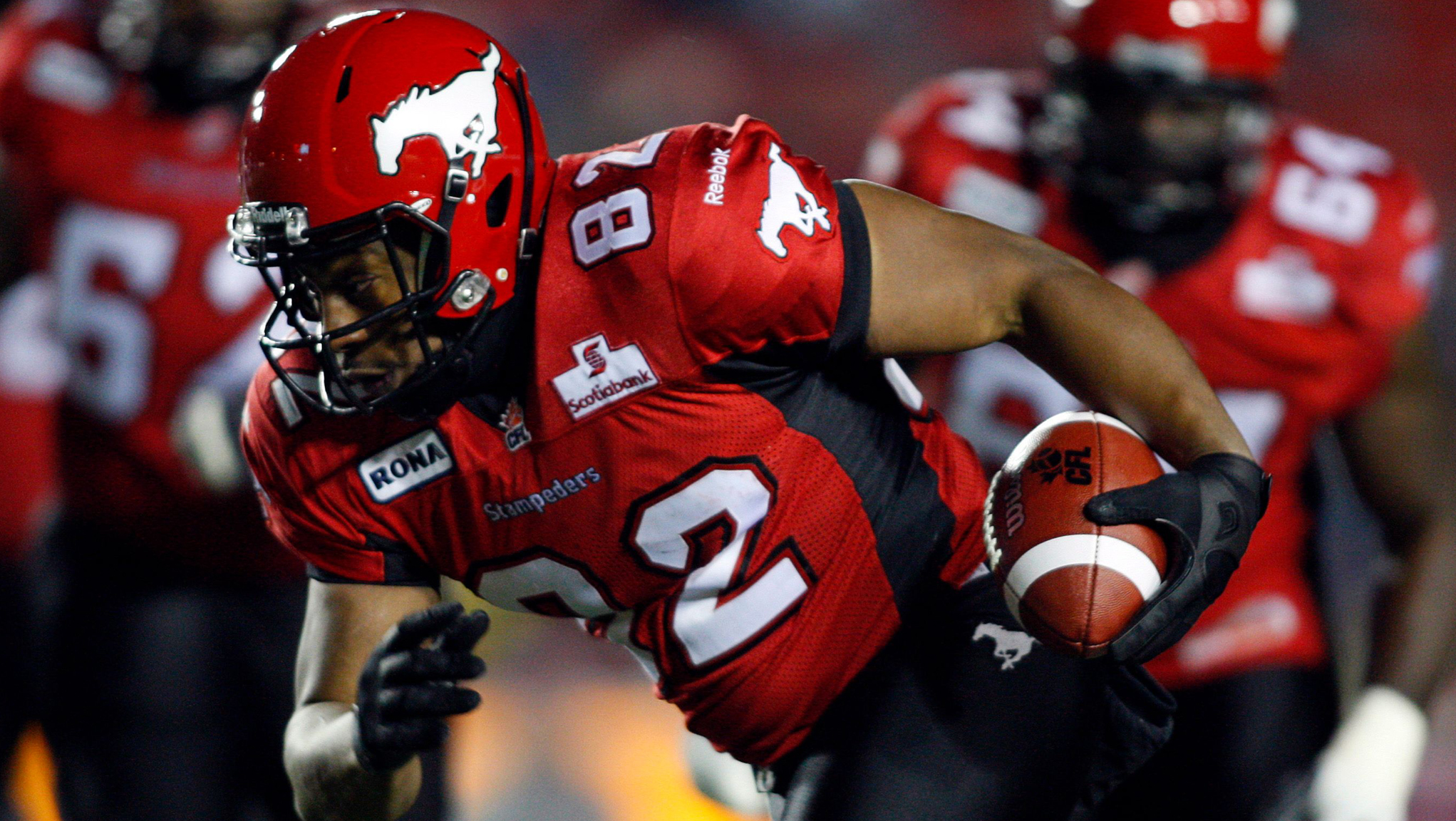 In Calgary, Nik Lewis had nine consecutive 1,000-yard seasons, establishing himself as one of the CFL’s all-time great receivers (Photo: The Canadian Press)

When former Stamps’ GM Matt Dunigan called Lewis to tell the player that he’d signed 17 years ago that he was a first-ballot inductee to the Canadian Football Hall of Fame, Lewis’ thoughts went to his mother, Faye.

“My mother passed away in January and it just made me think about how much she wanted me to be in this position and how my career started because of my mother.” he said.

“That was really my defining moment of being able to listen to mom and understand her impact on how my career was going to go.”

Through his 14 seasons, Lewis took fans across the league on a wild ride. He was beloved in Calgary and while his time in Montreal was comparatively short, he won over fans there too. If you were a fan of a rival team Lewis was the easy villain, the uber-talented pair of hands that could stick the dagger in your team’s season and be telling you all about it a second later. Every sport needs personalities like that and not enough have players that built relationships the way that Lewis did.

“I’ve always lived with the mindset that everyone can do things that I can’t do. Just because I do it on TV doesn’t make me special. I think my connection (with fans) is just closing that gap between the fan and the player,” Lewis said.

“In the beginning it came from fear, the fear of failure. You see all these athletes…and as soon as they make a mistake, you’re ready to rip the pedestal out from under them. Well, one, they didn’t ask to be on the pedestal and two, nobody wants to go through that.

“For me, I knew some of the things I did off the field like drinking and different things that I did, I never wanted to be someone that you didn’t know who I was.

“My teammates knew who I was. My coaches knew, the fans knew. I wanted to be 100 per cent me and it was about that fear of closing that gap between the fans and myself so that they would understand who I was, so I could hang out with them. It’s funny because a couple of (fans) came to a Stampeders game right after I retired and they actually stayed at my house. It’s pretty cool.

“We’ve built friendships. I don’t have fans, I have friends. People come out and they cheer and it’s great. It’s a great feeling to be a part of.”

The staple to all of this, of course, is that Lewis gave fans plenty to cheer about over those 14 years. He went over the 1,000-yard mark in each of his first nine years in Calgary, then found the 1,000-yard mark again in 2016 in Montreal. He had six seasons with 80 or more receptions and two seasons with 100 or more catches. A three-time CFL All-Star and a six-time Division All-Star, Lewis racked up 13,778 receiving yards (fifth all-time) and had 71 touchdowns. He heads into the Hall with Grey Cup rings from the 2008 and 2014 Stampeders’ seasons.

One of the few silver linings in the pandemic is that the 2020 and 2021 Hall of Fame classes will go in during the same year. That allows Lewis to reconnect with his longtime Stamps’ quarterback, Henry Burris, a member of the 2020 class.

“It’s amazing to be able to go in, one, but two, to see Hank get the call and know that we’ll be going in shortly after,” Lewis said.

“Hank had been successful, went to the NFL and came back and led Saskatchewan to the playoffs the year before. Coming into that season (2004) I don’t know if they expected much out of me but I wanted to show that I belonged. From Day 1, we all clicked and it all worked.”

There are many spots along the journey for Lewis and many more highs than lows on the field, which is much more than the average pro athlete gets. When Lewis gets inducted in November, he’ll be thinking of his mother and her advice back at the start of his journey to a new country and her impact on his life and career.

“My mother is not just a Nik Lewis fan, she’s a CFL fan, through and through,” he said, remembering that she’d randomly call him during the season to see if he was watching other teams’ games.

“My aunt and my uncle were tremendous athletes and my mother wasn’t. So she always grew up cheering for them and she knew the games in and out. She had a huge impact on my life and on who I am today. Everything here forward is always about my mother and representing that name on the back of your jersey just as much as the one on the front.”