HOF Profile: A ring designed for the Hall, now one for Brule 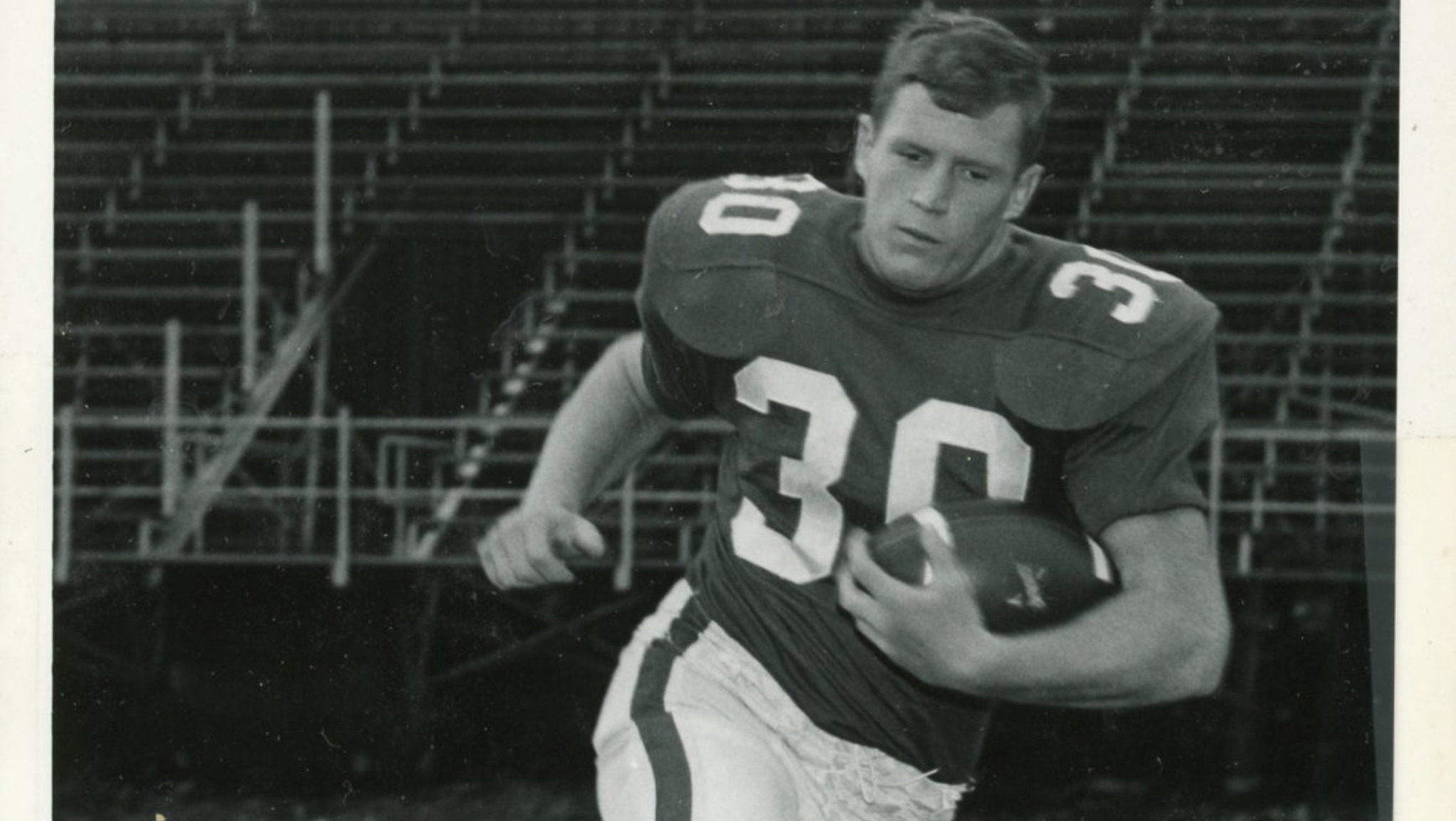 Every entrant into the Canadian Football Hall of Fame has done something unique, but no one will enter the hall the way that Paul Brule will.

“I go back in my mind through one of my jobs,” the former St. Francis Xavier star running back said.

“I worked with the Hall of Fame committee to design the current rings. I was working for Jostens at the time. They make championship rings and the Hall of Fame contacted me and said, ‘Paul, we’d like to create these rings. Can you help us?’

“Lo and behold I end up at the head table and end up presenting one of those rings. I think back and say, ‘I never, ever dreamt or expected or thought I’d be going up there myself, receiving a ring and a jacket and being honoured. You talk about things coming full circle in your life. Holy cow. It is really incredible.”

Brule enters the Hall as an amateur player, having racked up unprecedented yardage with the X-Men from 1964 to 1967. In 1966, Brule became the first player in Canadian university history to crack the 1,000-yard rushing mark in a season. He set a single-season record with 20 rushing TDs and would go on to break that in 1967 with a 25-touchdown season.

He scored a USports record eight touchdowns (seven rushing, one punt return) in one game; a record that still stands today. He graduated after the 1967 season with 51 career touchdowns (49 rushing). Fifty-one years later that record stands across the country.

Hall of Fame coach Don Loney convinced Brule to leave home in Ottawa and move out east, where he was building a powerhouse football program. The X-Men went 133-31-2 under Loney between 1957 to 1973. In Brule’s time at X, the school won the Atlantic University Sport championship three out of his four years and won the second-ever Vanier Cup, beating Waterloo in 1967. Brule tells a great story about how the Toronto media called X the weak sisters of the east that didn’t belong in the game. “40-12 later and yeah,” he laughed, “we belonged.”

“I was going to a university and a team that hadn’t lost a regular-season game in five years,” Brule said.

“It was loaded with great talent and good veterans and I really had to bide my time and learn the system. Believe me, it was a system. It took me two years before I became a starter.”

In his first two years with the program he saw the field on special teams and played backup running back. He didn’t get the starting job until the player in front of him had graduated. The learning process began from the second he joined the team, though. He saw how the town of Antigonish, N.S. embraced the team and the type of environment Loney had built.

“It was so professional, really. I say this to the dismay of some CFL people, but going from St. FX and the way we were treated, we were treated like pros,” he said.

“Everything we did was on a pro level because Don Loney had been a professional football player himself and a very good one. Everything we did, we traveled in shirts and ties and blazers and dress pants. We bussed everywhere. We left campus in the morning and drove to Fredericton, N.B. which was eight hours. We looked like a pro team stepping off of a bus, every time, everywhere we went. There were no sweat suits and jeans, anything like that. It was first class.”

Brule established himself as a first-class talent and in 1968, his hometown Ottawa Rough Riders made him the second overall pick in the CFL draft, but ended up in Winnipeg that same year. Things changed for him when he got to the pro level. The fast, powerful athlete that ran through the opposition for a solid two years prior was moved to the other side of the ball.

“I always considered myself a running back. I get to the pros and all of a sudden they’re trying to convert me into a cornerback,” Brule said. “Out covering the fastest guys in the league.”

Brule successfully made the transition. Playing free safety, he was named a West Division all-star in 1970, pulling in nine interceptions. He also returned kicks and punts. He was with the Blue Bombers through the 1971 season and spent 1972 with Montreal before retiring.

Sport has played an integral role in his post-football days. He went from the Alouettes to doing marketing for the Olympic Committee in Montreal, leading up to the 1976 Games in a role that let him travel the world. Jobs with companies like Bauer took him to more Olympics. Working with Jostens had him dealing with college programs and professional leagues across North America.

Now, 46 years after he stepped away from football as a player, he’ll get the ring that he helped design, tying his personal achievements and his second professional life together.

“It’s been a fun ride. No complaints,” he said.