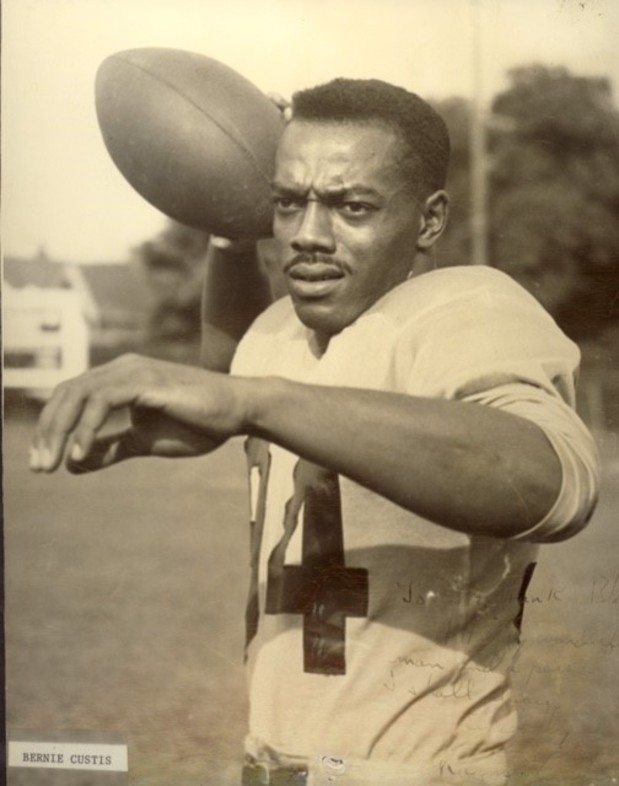 Thursday, November 26, 2015 — WINNIPEG – The Canadian Football League has honoured the first black starting quarterback in the history of pro football with its prestigious Commissioner’s Award presented by Microsoft.

“Before Henry Burris and Damon Allen and Warren Moon and Chuck Ealey, there was Bernie Custis. Many of us here tonight would not have had the opportunities we’ve had, were it not for people like Bernie Custis.”

Custis started at quarterback for the Hamilton Tiger-Cats in 1951, earning all-star status in the Interprovincial Rugby Football Union, the forerunner of what is today the East Division of the CFL.

He won a Grey Cup championship with Hamilton a few years later and went on to a sterling coaching career at the junior, college and university levels.

“Bernie is now 87. I want him to know that this league – our league – remembers him,” said Orridge, the league’s first black Commissioner. “We thank him. And tonight we honour him.”

The announcement was made at the Shaw CFL Awards, one of several marquee events leading up to Sunday’s Grey Cup Championship game, featuring the Edmonton Eskimos and the Ottawa REDBLACKS. It will be broadcast at 6 pm ET on TSN and RDS in Canada, ESPN2 in the United States, Pacific Rim and the Caribbean, and ESPN on BT Sport in the UK and Ireland.

The Commissioner’s Award, presented by Microsoft, is given each year to an individual or group that has made an outstanding contribution to the development of football in Canada.

A star quarterback at Syracuse University in 1948, 1949 and 1950, Custis set numerous school records that would last for decades.

Drafted by the Cleveland Browns in 1951 – at a time when there were no black quarterbacks in the NFL – Custis came to Canada looking for an opportunity to play the position he loved.

The award was accepted on Custis’ behalf by his godson, former CFL player John Williams Jr., who narrated a film on Custis and other black players entitled Gridiron Underground. The documentary’s executive producer William Armstrong was also in attendance.