O’Leary: Hall of Fame nod an opportunity for Cornish to inspire 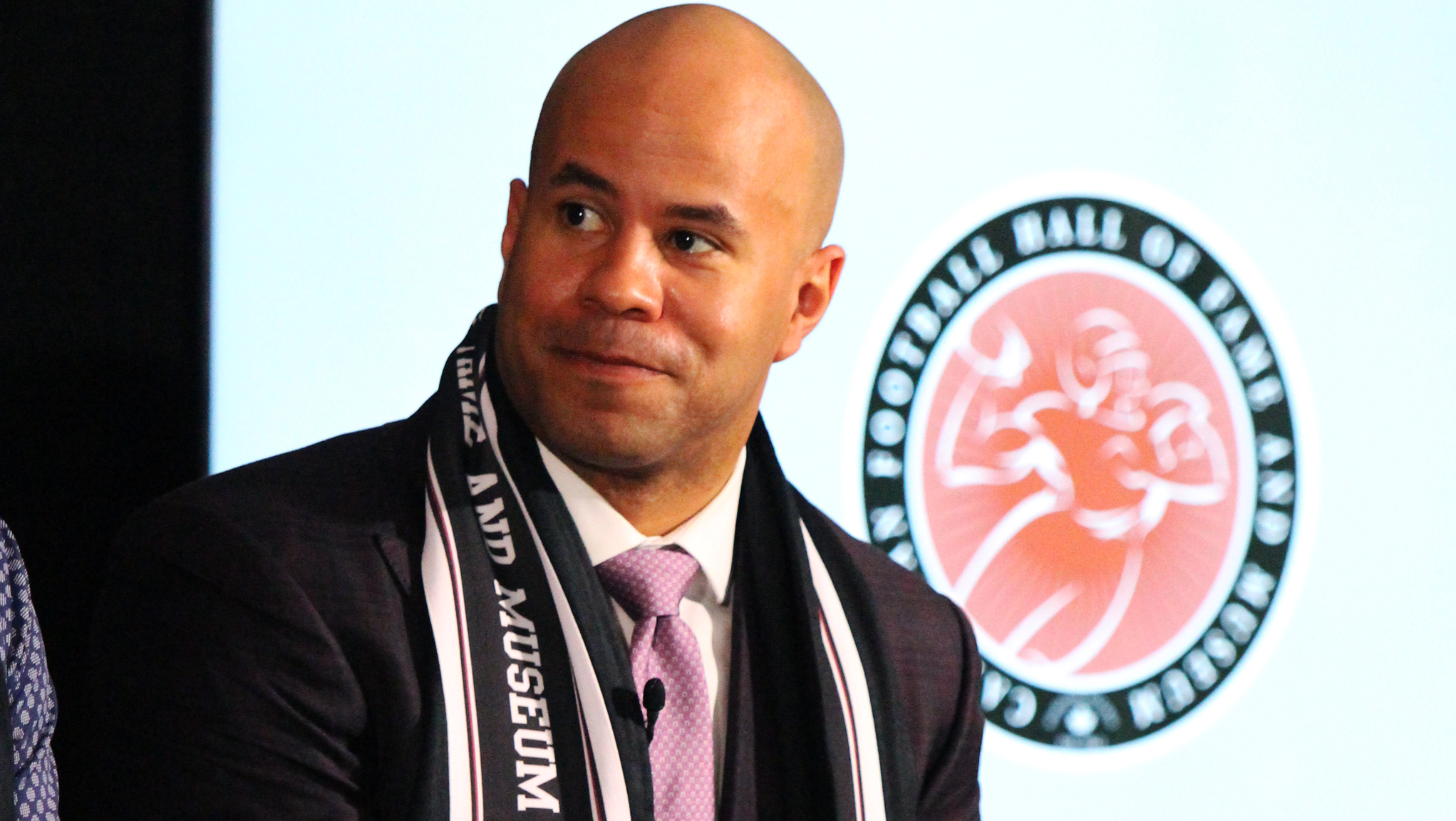 If you know anything about Jon Cornish, Wednesday’s news shouldn’t have been a surprise.

If you had the good fortune to witness Cornish perform the alchemy required to harness the best attributes of a bulldozer and a ballerina for the Calgary Stampeders, you know why he’s Hamilton-bound, heading to the Canadian Football Hall of Fame.

He played seven seasons in the CFL, but it was a magical stretch from 2011 through 2014 that landed him in Toronto on Wednesday, headlining an offensively-driven induction class. In that four-year, 63-game window, the Vancouver native rushed 775 times for 5,215 yards and 37 touchdowns. In that span, the Stamps went 52-20 and played in two Grey Cups, winning one in 2014. He was also a part of the Stamps’ 2008 Grey Cup win, primarily playing special teams.

RELATED:
» Call to the Hall: 2019 Hall of Fame Class revealed 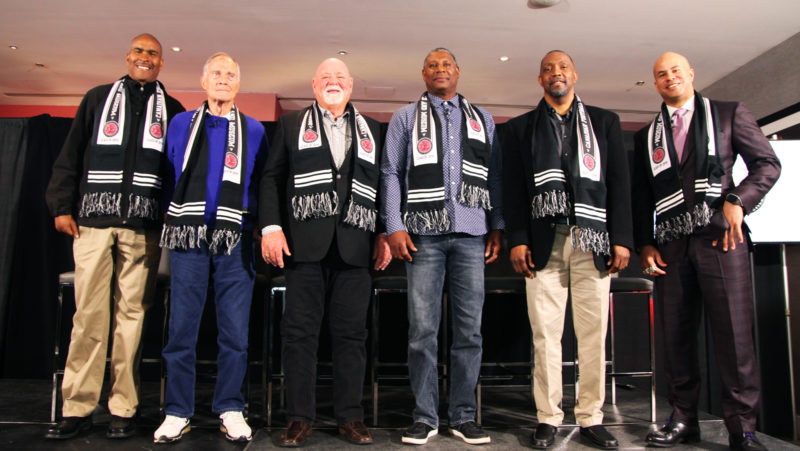 The 2019 HOF class is pictured at BMO Field in Toronto, Ont. (Shannon Vizniowski/CFL.ca)

Introduced as a hall of famer for the first time on Wednesday, Cornish stood in front of his wife and his peers and thought for a moment about his journey.

“My mind went to all of the people that helped me along the way,” he said. He wore a dark suit with a white shirt underneath and his right hand glistened with the rings that found their way to him through his football career.

“No football player is an island. We’re always a team. (I thought about) the people that were really pivotal to help me get here,” he said.

“Coach (John) Hufnagel, Dave Dickenson. Joffrey Reynolds was a role model for me at the position. Going back further as a kid, seeing guys like Barry Sanders…all these guys that played different positions and were really good, they were inspirational to me.

“If I can turn around and be inspirational to other people, that’s what the thought process was. It solidifies my career and I look at that and look to that for inspiration.”

Cornish’s time atop the CFL was remarkable. He was as big a personality on the field as he was off of it, as honest and social media savvy as he was talented. No defence was too daunting, no fan base untrollable. Injuries would make the window smaller than he would have liked it to be but Cornish made sure he maximized his opportunities; even if they were hard to come by in the early stages of his career.

Drafted by the Stampeders 13th overall in 2006 and reporting to his first training camp in 2007, he’d have to wait his turn behind Reynolds, who would earn two more CFL All-Star nods before the 2010 season. Cornish had a history-making senior season at the University of Kansas in 2006, but Reynolds was in the prime of his career.

“I learned from Joffrey how to be a healthy running back, preventing injury, what to see on the field. He was truly a pivotal piece of the puzzle,” Cornish said.

While he waited, he continued to think about greatness.

“I always knew that my potential was only limited by how much I didn’t want to work. So I put the work in. I aimed to be a candidate to win the Lou Marsh,” he said.

“That was an explicit goal that I had before, going all the way back (to childhood). Mario Lemieux, Donovan Bailey, those guys won that trophy and I thought, ‘I could do that.’ That’s what I believed.

“It was that belief that carried me through all the different stages. It gave me the patience to sit behind Joffrey for a few years, to stay with the Stampeders. Having that patience allowed me to get to this,” he said, extending his hands to his surroundings, where the rings on his hand caught the light in the room again.

“I couldn’t have accounted for it. I didn’t know what it was going to be. I just continued to work every day.”

“If I can turn around and be inspirational to other people, that’s what the thought process was. It solidifies my career and I look at that and look to that for inspiration.” 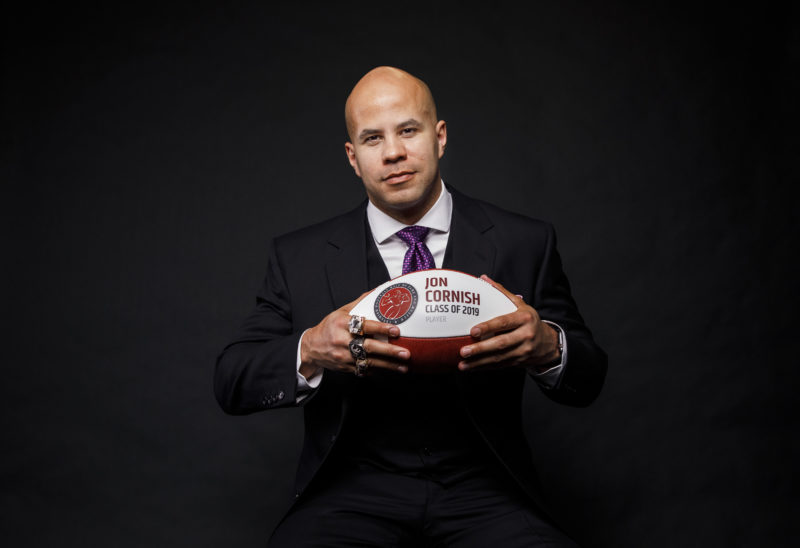 He became the full-time starter in 2012 and the hard work began to pay off. While the Stamps fell to Ricky Ray and the Argos in the Grey Cup that year, Cornish was dominant, rushing for 1,457 yards and 11 touchdowns. He put up a career best 1,813 yards in 2013, averaging seven yards per carry.

The more comfortable he got in his role, he tried to approach the game in different ways.

“Internally I called it offensive line independence,” he said.

“Basically just taking the game and what happens as it is. Rather than expecting a play to look a certain way, just being completely independent of that. Just being able to take the ball in my hands and make something happen regardless of where the pieces were.

“That required patience and understanding of our players and what they’re trying to do, what the other team was trying to do. Putting those pieces together really turned the game into more of a psychological game than some physical thing. I think that’s the final step when you become a great player.”

As the good fortune mounted for him, Cornish stayed aware of what was going on in the world around him. His success as a Canadian in the CFL, winning the Lou Marsh Award in particular, gave him a platform and he tried to take advantage of it. Raised by two moms as a child, he eagerly took on the role of You Can Play ambassador for the Stamps. He continues to work with charities today, with his main efforts going into mental health education for children. In his post-football days, he’s also delved into the arts scene in Calgary.

“I had the opportunity to present in the opera. I was on stage with the Alberta Ballet for 20 minutes,” he said.

“There was a lot of opportunity that was fun but now you start to see the other side of that, where the help you gave to the community previously, (people will say), ‘Hey Jon the work you did with LGBTQ community, we’re very thankful for that.’

“Those kinds of things are the true rewards. That’s why I still work with the children’s hospital, Wood’s Homes in Calgary, The Calgary Foundation. Working with these groups for further community engagement, improving our communities. My primary focus is mental health, especially with children.”

On Wednesday, Cornish said that the goal for him now is inspiring others. The Canadian Football Hall of Fame and Football Canada now awards the top Canadian playing football in the NCAA with the Cornish Award. If life is about leaving things better than you’ve found them, Cornish has done that.

“For me to maybe play a part (in showing a young player they can play at the NCAA level) that’s the kind of thing you think about at this point,” he said on the stage.

“I’ve played my whole career, it is what it is, it’s all done now. If what I did there was able to inspire more kids to believe they can play football at the highest level, that’s all I could wish for.”