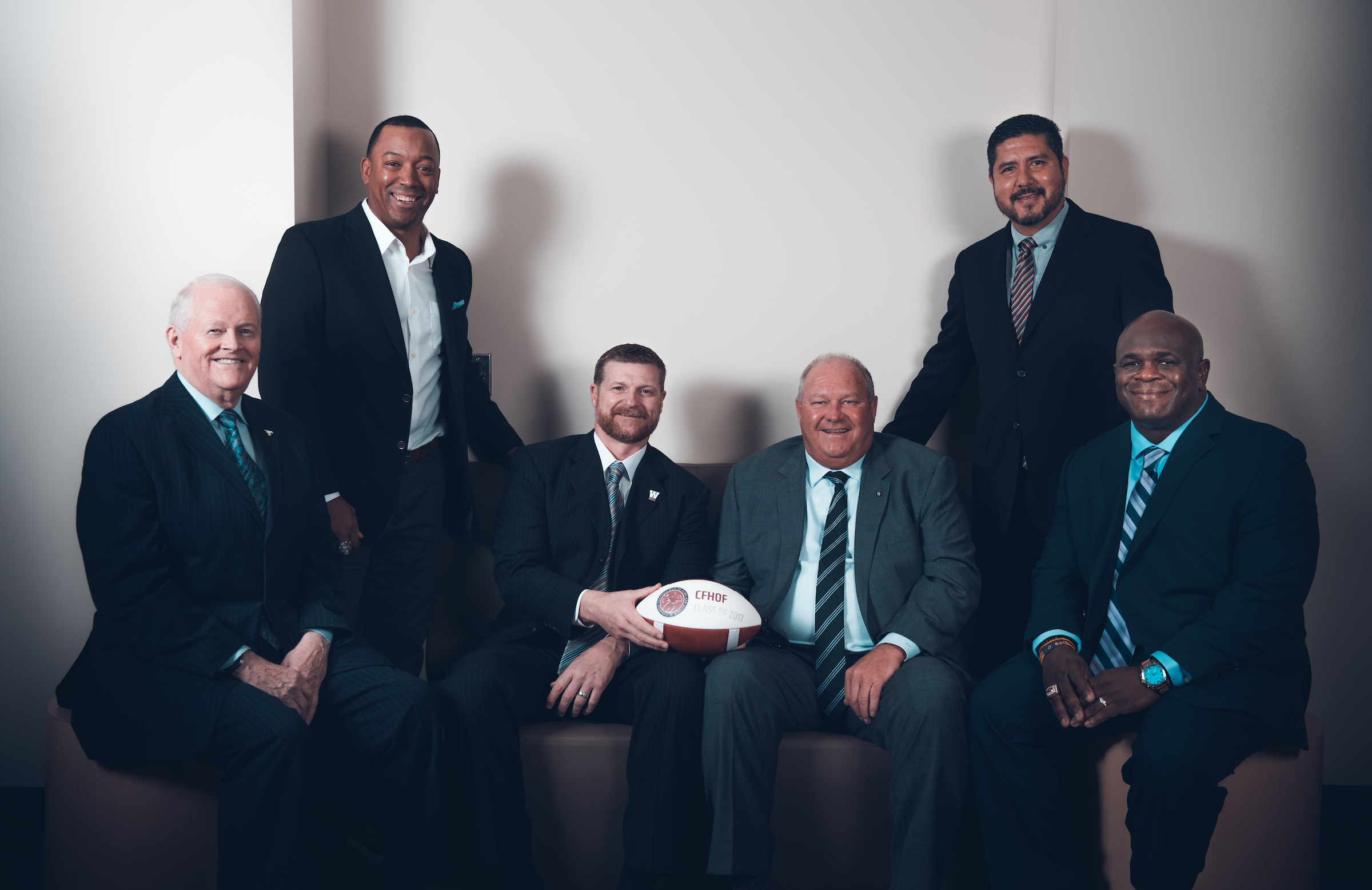 REGINA, SK – The Canadian Football Hall of Fame and Museum’s stellar Class of 2017 features the Canadian Football League running back with the most consecutive 1,000 yard seasons, the game’s leading passer, one of its’ top tacklers, its all-time leading receiver, an Alberta football stalwart and a legendary university coach from Saskatchewan.

“Every class is special and this one is exemplary,” said Mark DeNobile, Executive Director of the Canadian Football Hall of Fame and Museum (CFHOF), as he officially announced the names of this year’s inductees at a celebration event at the new Mosaic Stadium.

“The Inductees are Kelvin Anderson, Anthony Calvillo, Mike O’Shea and Geroy Simon in the player category. In the Builder category, long time administrator Stan Schwartz and recently retired Coach of the University of Saskatchewan Huskies, Brian Towriss have been selected.”

The introduction of the class is one of the highlights of Mark’s CFL Week, a new series of signature events that celebrate Canadian football and herald the approach of the upcoming Canadian Football League season, which kicks off this June. Formal induction ceremonies for this year’s CFHOF class will be held later this year, at the Hall of Fame game in Hamilton on September15th and during the week prior to the 105th Grey Cup presented by Shaw in Ottawa.

Here’s a closer look at its members:

Anthony Calvillo played for three teams (Las Vegas Posse, Hamilton Tiger-Cats, and the Montreal Alouettes) during his 20 year career as quarterback in the CFL.  He was a Grey Cup Champion three times during his career in 2002, 2009 and 2010, all with Montreal. Calvillo was a ten-time Eastern All-Star, a five-time CFL All-Star and a six-time CFLPA All-Star. Calvillo was East Division’s Most Outstanding Player seven times and  the CFL’s Most Outstanding Player three times (2003, 2008 and 2009) . In 2002, the Most Valuable Player in the Grey Cup. He threw for 79,816 yards, making him the CFL’s and pro football’s all-time leading passer.

Mike O’Shea played in the CFL for 16 seasons for the Hamilton Tiger-Cats and the Toronto Argonauts.  He was Rookie of the Year in 1993, a CFL All-Star Linebacker in 1999, and won the John Candy Memorial Award (given to the Toronto Argonaut Player of the Year) in 1999.  He ranks second on the All-Time CFL List for defensive tackles with 1,151, seventh of the All-Time CFL List for special team teams with 169, and second on the All-Time Toronto Argonaut List for Most Games Played with 205. He added 22 interceptions, 11 fumble recoveries and 30 quarterback sacks. O’Shea is a three-time Grey Cup Champion (1996, 1997 and 2004).

Stan Schwartz has been part of Canadian football for five decades, dedicating himself to the Calgary Stampeders, the CFL and the game at various levels. He began his involvement in the 1970’s as the defensive coordinator for the Calgary Mohawks junior team.  He joined the Stampeders in 1976 where he served as assistant coach.  He was the Calgary Stampeders’ President for eight years, starting in 1996.  During his tenure, the Stampeders reached the Grey Cup eight times and captured the trophy in five of those years.  Schwartz was inducted into the Calgary Bantam Football Wall of Fame in 2003 and was inducted into the Alberta Sports Hall of Fame and Museum in 2005. He was awarded the Hugh Campbell Distinguished Leadership Award in 2009 in recognition of his contributions to the CFL.

“I would like to thank the Selection Committee for their commitment and dedication in selecting a truly excellent Canadian Football Hall of Fame class. This is the fifth class selected under the new terms of reference under which we recognize all levels of Football in Canada. We are very pleased to see significant representation in the 2017 class,” added DeNobile.

“On behalf of the CFL, our Board of Governors and our fans, congratulations to this year’s inductees on this great honour,” said CFL Commissioner Jeffrey L. Orridge. “Every one of these gentlemen had a tremendous impact on the growth of football in our country, and for that we are forever indebted to them. Thank you to the Canadian Football Hall of Fame and the Selection Committee for helping us all recognize dedication and greatness.”

The new inductees will bring the total number of Hall of Fame members to 289 in the Hall’s Zone of Champions, which features busts of each member of the Hall, and will be relocated to Tim Hortons Field in 2017.