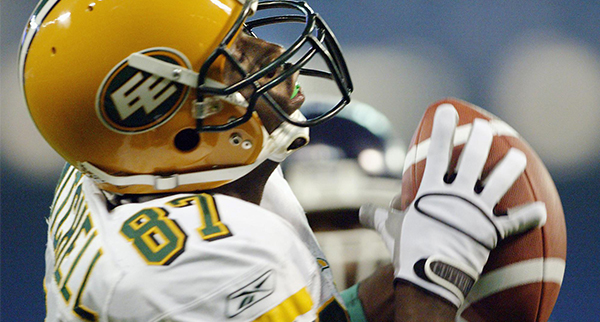 Mitchell entered the CFL with the Argos in 1997, playing with the double blue through the 2003 season and again in 2007. He immediately made a mark in the league, recording 1,457 yards on 77 receptions and 17 touchdowns – earning him the CFL’s Most Outstanding Rookie Award. He went onto record 821 receptions for 12,014 yards (9th on the all-time receiving yards list) and 90 touchdowns in his career.

After retirement in 2008, Mitchell spent time as a scout and guest coach for the Eskimos. He joined the Green and Gold full-time as a receivers assistant in 2011 and as the receivers coach in 2012.

Joining Mitchell in the Class of 2016 is former offensive lineman Doug Brown, defensive lineman Rodney Harding and linebacker James West. Also inducted into the builder category is Don McDonald. Induction weekend details will be made available at a later date.

The new inductees will bring the total number of Canadian Football Hall of Fame members to 283 in the Hall’s Zone of Champions, which features busts of each member. The Canadian Football Hall of Fame and Museum operates as a non-profit registered charity. Located in Hamilton, Ontario since 1963, it is home to more than 80,000 Canadian football artefacts, ranging from equipment and trophies to photos and videos. The Hall will be relocated to Tim Hortons Field in 2016.